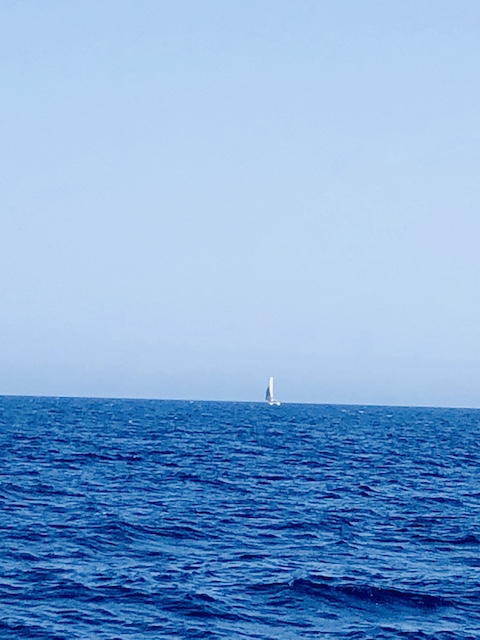 After we had come from Almerimar to Cartagena and then with new rudder bearings to Mar Menor, the passage to Ibiza was meant to follow. Unfortunately, our navigation lights did not work anymore. Without that we could not do a crossing (with night sail) to Ibiza.

Tom and I woke up early on August 9th. We were a bit frustrated when the Mokara left around 8am to sail to Ibiza (130m, 24 hours). We were very sad, but could also understand that they wanted to take the good wind.
So it was time to solve the problem with the navigation lights. Fortunately, Tom knows lots about electrical systems and together we measured the electricity coming in at the front. There seemed to be enough electricity. Accordingly, the lamp had to be broken. Tom deinstalled it as I steered our KIRLANA to a small town on the Mar Menor, where we hoped to find a yacht supplier.
Moments later Tom announced that the light was not broken. He had connected it to another cable that he knew was working.

What was the mistake then?

Tom re-examined the cable connections in the front of the bow and maintained them with contact spray. This was enough for the lights to work again. Machines stop. Re-installed the light together. Then go after the Mokara. It took about an hour for all of this, so our sister boat had already disappeared behind the horizon. On the AIS I could just see their position before they disappeared there as well. (For non-sailors: AIS is a general identification system, but it has a limited range. In the case of the Mokara about 4 SM) I headed towards the last seen position, while Tom brought everything else back in order.

With about 5-6 knots we drove under engine out to sea. We hurried …
At some point we could discover the Mokara on the horizon. She was tiny. We kept going and after almost two hours we almost caught up with them. Under sail we picked up further. We had strong wind from behind and used the butterfly sailing from time to time to stay on course. In between, it was necessary to tack. For a long time we have been at about the same height with our sister boat. But gradually we overtook the Mokara and left her behind us.

Sarah, my sister, was getting worse and worse during the day. Unexpectedly, she suffered from seasickness, but no one was really aware what it was … For dinner there was potato gratin. To peel the potatoes at sea was hard for me. I kind of got seasick and very tied. I could hardly eat anything…
After dinner, I fell into bed with Kiran, who was really tired from exhaustion. Fortunately, Kiran fell asleep almost instantly, because now I had to get Solana to bed. Here I wanted to sleep properly, after I had hardly succeeded with Kiran. But at about 11 pm Tom called me. The wind came constantly from behind and even if this brought us well towards Ibiza, there was always the danger of a flying jibe (for non-sailors: strong and uncontrolled turning of the tree from one side to the other). We didn’t have a preventer by then.

We agreed that one of us was sailing while the other was sleeping in the cockpit on the bench. We piled up the bench with pillows and blankets. In the dark, of course, we also wore our life jackets and later we even needed warm jackets.
The moonlight was a help to recognize the sails position. After a while we got used to night sailing and under starry skies we sailed to Ibiza.

The Mokara appeared at the beginning on the AIS again and again, but at some point we lost them. Later we learned that they had adapted to the wind and instead of Ibiza they sailed to Formentera. The wind was better for going there, but since we had made an agreement for Ibiza and Sarah and Ben had to take their return flight there, we continued to Ibiza.

With the rising sun, I finally saw the coast of Ibiza. I was dead tired and did not feel really well either. Although I have to say that I am quite satisfied with the low sea-sickness. I had expected worse …

Finally, Tom took over and Ben was awake, too. So I was able to go to bed and relax a bit.
Now we also noticed that the Mokara was on Formentera. Pity! It should take a long time to see them again…

The first bay in Ibiza was beautiful. Red-orange rocks to a nice shore (Es Bol Nou). We were the only boat in the bay. Perfect! But the waves were so heavy that landing with dinghies was not really possible. Trying to get Sarah ashore, I jumped out of the dinghy and wanted to help bring it onto the beach. At the same moment a jellyfish burned my left upper arm. It burned like hell! As fast as possible, I climbed back on the dinghy and we stopped the attempt.
Totally exhausted we cleared the anchor and drove on to the next bay. 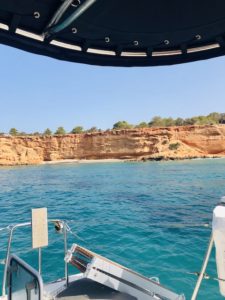 Also in the new bay were many waves (Es Jondal). We were all very exhausted and seasick… All around us were super yachts and a lot of jetskis did their fast laps.
After a rest and swimming together in the clear water, we tried to go ashore with the dinghy in the evening. The best place was a small jetty. We tried there. Everything went very well. Relieved, we asked for a table in the restaurant. Tired and hungry we sat down. A look at the menu exceeded our expectations. Starter 22 €! In our despair, we probably would have paid these prices, but the menu did not really suit us.

So we got up and looked for another restaurant. On land, however, this was incredibly far away and it was still super hot. It quickly came to the decision that we wanted to dare the beach with the dinghy despite the strong swell.
Said and done. On the beach, the swell was even stronger than expected. Ben should get off as soon as we were close enough to pull the dinghy up the beach. We seemed to be close. Tom just wanted to tell Ben that he should not get out yet, when Ben thought “now.” Hop, Ben jumped overboard … and he was gone!
Ben disappeared in the swell all the way up to his cap. That he would get wet, he had expected, but not that he would go down completely…
Together we made it to the beach, but in retrospect we have to say that the whole action was quite dangerous. The waves were incredibly strong. The dinghy rolled over Sarah’s foot and all the others were almost overturned.
Finally on land, but all soaking wet, we walked the few meters to the nearest restaurant. Again, we found a table and the prices were better (Spaghetti Bolognese 12 €).
The food was really good and we got some rest. Sarah confessed that she had meanwhile thought about going to a hotel…

After the meal we set off to ride the dinghy back to KILRANA. At the beach, we observed five adult men, who joined forces to push a dinghi back into the sea. The swell was still heavy. We discussed how we to proceed and actually made it well into the sea and on board.

Dead tired, we sank into our bunks and slept a long sleep…

Short summary of the trip to Ibiza: