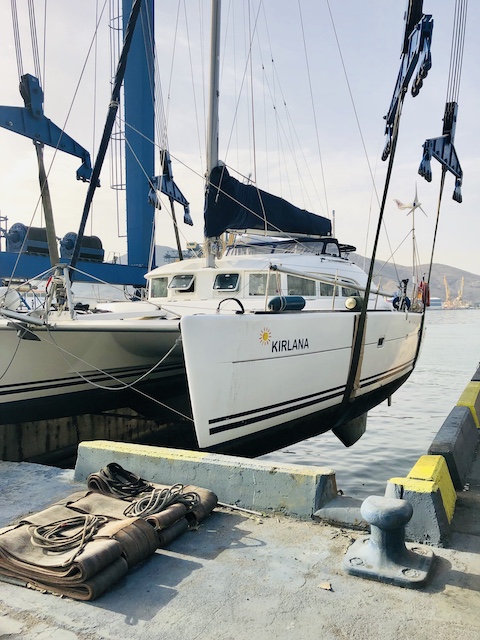 After our first almost 130 SM on KIRLANA we reached Cartagena on 6.8.2019 and finally the rudder bearings were to be renewed. Then the crossing to Ibiza should take place. Everything was exactly planned with visitors and wind …

Appropriately, we left our mooring in the marina of Cartagena on August 7th and drove the few meters to the shipyard (Valadero) Ascar’s travel lift.
Apart from the fact that once again the experts had no idea how to handle a Lagoon 380 (the best selling catamaran type ever!), the lift out worked without any problems.

On the dry dock

On the dock, our hull was freed of vegetation with high-pressure cleaner. Actually, we did not need a new antifouling, but we decided that we would still get one, since we were out of the water.
(For non-sailors: Antifouling is a special underwater hull painting, which is to prevent the growth of algae and shells. This is one of the few environmentally harmful sides of sailing…)
Finally, the experts came for the rudder bearings. The take out of the rudders was surprisingly easy. It’s good that a few days ago we sprayed all the screws with WD-40 to loosen. The boat was lifted a little higher so that the rudders could be taken out completely.

Then the bad surprise: The spare parts, which I had ordered after many questions and clarifications of the situation, did not fit! And not at all!
Honestly, we still do not know for sure what was sent to us…
For a long time people tried and thought about how the parts could fit or how it was all conceived. But no chance.

Fortunately, the Ascar yard’s rudder-bearing expert agreed to interrupt his holiday and come the next day.
Unfortunately that also meant that we would spend the night on the dry dock.
Our KIRLANA was jacked up on wooden blocks and we were supplied with electricity and water. Then the first layer of antifouling was applied. After 4-5 hours it should be dry.

In the afternoon our first guests arrived. My sister Sarah and her partner Ben came from Alicante with a rental car. After the two settled a bit and the rental car was returned, we met again in the beautiful city of Cartagena to have dinner. Solana was enthusiastic about the many shops and bought gifts for her friend Zoe, whose birthday is in mid-August.
After a little stroll through the city, we went back to dry dock. The use of water and toilets was improvisational possible.

On August 8, the expert actually came to the shipyard at 7 o’clock. He looked at the situation seriously, measured here and there. Then they removed something that was still in the hole where the rudders were previously in. As it turned out, these were the old rudder bearings. They were thick metal rings. Later, the expert explained to us never to use metal as a rudder bearing …

The works dragged on. The second layer of antifouling was not applied for a long time, because there was still work on other boats. You must know, August is THE holiday month in Spain and it is hardly possible to find workers. Anyways, a new starboard starter battery had already been installed. Recently, the engine on this side often did not start.

Time is running out…

We got pretty nervous. The Mokara left already at 12 o’clock to go to the area of ​​Mar Menor. From there we planned to start the crossing to Ibiza the next day. Fortunately, Tom had talked to the shipyard workers that we would be lifted into the water even after the shipyard had actually closed down. If everything worked with the new rudder bearings…

Antifouling was applied, then the rudder bearings partially installed. At 3 pm the workers decided to take a one-hour break. Although we gave them that of course, the time was running out.

At 5:15 pm we finally got back in water again by crane. The expert checked that the new rudder bearings were working properly and no water penetrated or anything similar.
We were pretty excited.

Everything was fine. We were released from the crane and we drove out through the harbor basin. It was incredibly good to finally be back in the water.

We hurried and were determined to make it to Mar Menor before dark. The crew of the Mokara told us exactly where they were anchored and that it was a simple sandy bottom.
With nightfall and navigation lights turned on, we reached the anchorage in Urmenor after just 3.5 hours. We anchored quickly and were happy to see the crew of the Mokara again. Sarah and Ben enjoyed the tranquility aboard while we were on the Mokara.

Unfortunately we had to realize on our arrival that our navigation lights for the sides (in our case a device on the front of the boat with red and green light) did not work. So we could not dare to cross to Ibiza. Our plan was to sail from Mar Menor in about 24 hours directly to Ibiza. The wind was just perfect…

We agreed with the Mokara that we would look for the cause early the next morning and fix the problem so that we could travel together. In Almerimar the lights still worked!

If and how we came to Ibiza, you will find out in the next article …

If you ever need to get your boat repaired in southern Spain, we can only recommend the Ascar shipyard in Cartagena!