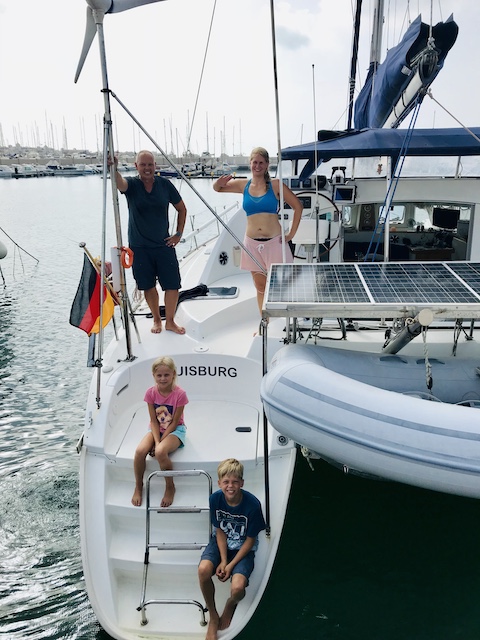 Now we have been on board the KIRLANA for more than a month. Time flew by and yet it seems like forever.
So much has happened that once again I hardly had time to write down the experience.
In this article I tell you about our first long sailing trip.

In the port of Almerimar we worked a lot on the boat. Much had to be optimized and some repaired. We felt we had little time for the children. Good that the Mokara was lying next to us all the time and the kids had each other to play with.
In between, the Somewhere was in Almerimar. On board a German family from Hamburg. Two girls, one boy. Solana was happy and Kiran had a lot of fun too.

The four of them often spent hours at the beach. With a walkie talkie. There were sometimes calls like: “Mom, we need money for ice cream!” Then we went to the beach with the e-scooter or dinghy and took care of the children.

On July 26, the crew of Somewhere wanted to leave for Portugal. But after a few hours they returned to Almerimar. The wind had blown them so hard that they just could not get ahead. All children were excited. So they had a little more time together.
Jens had left us on his iCut with the same wind. He had to cross the Balearic Islands in the direction of Sardinia. We hope to meet him again soon …

We had a gangway installed and used the mast chair to tie the tug to the stag. Solana enthusiastically used the chair as a swing. Exciting action …
I lay in bed for a few days with cystitis and Solana struggled with the last rabies vaccine. Heat and strange situation with the Spanish doctor caught her powerful.
First homeschooling-phases and trips to beach, show and fair completed our work on the boat. Meanwhile, we had an appointment in Cartagena agreed to be lifted out with the travel lift and change the rudder bearings. This was the only major repair that was due. I had already ordered spare parts and had them delivered to Almerimar.

Finally, we could not stand it anymore. After a good two weeks we finally wanted to go. The crew of the Mokara wanted to wait another day for better winds and drive a longer distance. We did not want to wait any longer and prefer to start with a short trip.

We set sail for our first sailing trips in the morning of the 3rd of August. After refueling we went from Almerimar to San José (33 SM, 6 hours). The wind was actually unfavorable and came to meet us in the front most of the time. It was very uncomfortable and we all did not feel very well. At the same time we tried to get to know our boat in areas that can not be tested in the harbor. So of course we set the sails. I was very proud, because I finally started to understand what to do and how everything is related.
Then I wanted to put the watermaker into operation. Frank, the previous owner, had explained everything to me in April. I understood it quite well then, but I was very unsure. In the watermaker was a preservative that had to be removed first by rinsing. So I started the watermaker and waited for the specified 10 minutes. Still the preservative was in the filter cartridge. I left the watermaker go on … The catastrophe started to happen. After about an hour, I realized that there was still some leftover preservative in the cartridge, and then, that I’d drained our entire fresh water tank by rinsing it for a long time!

Due to the strong swell and the work below deck, I was meanwhile pretty bad. (The watermaker is in the hull under a bunk.)
Panic broke out on me. We unscrewed the cartridge, removed the preservative, inserted a filter, also exchanged the carbon filter and started the watermaker. Thinking confusedly, I flipped a switch, realized at the same time that this had to be wrong, but it had already happened. By too much water pressure, a hose flew off and water flowed through this into our hull. I quickly closed the sea valve and called for Tom. Together we reconnected the hose. Now the watermaker was running.

After a while, I looked and had to realize that the carbon filter was leaking. We examined the situation and realized that the new filter was too high for the cartridge. I had actually bought the right filter … So old filter in. This is not used in active use anyway. Now everything was tight and up to the bay we had filled the water tank again to a quarter.

In the bay of San José we anchored well and recovered from the strain.
By the way, the water from the watermaker is very soft and tasty. 🙂

After a restful night in San José, on August 4th we went to San Pedro (20 SM, 4.5 hours). This time with wind from behind, so that we could try butterfly sailing for the first time. (For non-sailors: The mainsail is on one side and the headsail on the other.) Folded well.

Relaxed we anchored after several attempts in front of the hippie beach in San Pedro. (At the time we pulled the anchor down every time we lowered it, now we let it sag with a lot of chain before we test it.) It was interesting to watch the people on the beach. There actually lives a hippie community in tents and caves. And most are naked …

Towards early evening, the Mokara arrived in the bay. We swam over quickly and welcomed our friends. A beer or wine, swimming, a trip with Dinghi and the day was over again. 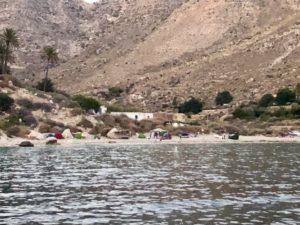 Since we had the appointment in Cartagena in front of us, we had to leave right on August 5th again. As a stopover we had targeted Aguilas or Calabardina. The Mokara started together with us, but soon we had left them far behind.
After a nice sailing trip we found in Calabardina a bay with many rocks. We tried to anchor, but the snorkel check clearly showed we could not stay here. A rock nearby was only about 1.5 meters deeper than our hulls!
So anchor on and drive through the bay. No suitable anchorage to find. A glance at the app Navily showed that around the cliffs seemed to be a more pleasant bay.
Although we did not feel like it anymore, we drove on. Cope (41.5 SM, 9.5 hours) was a beautiful sandy anchor bay. Soon after our arrival came the Mokara, which we had informed by now. While snorkeling we saw rays. Very exciting!

It was very nice in Cope and we would have liked to stay longer. The Mokara stayed there until 2pm but we left early as the wind was going to be good in the morning. We wanted to get to Cartagena early, to assess the situation for the travel lift. Well, the wind was not good. It was lull. 🙁
After 33 SM and about 7 hours we arrived in Cartagena. The arrival was spectacular. As we entered the harbor, we suddenly heard “KIRLANA KIRLANA KIRLANA …” over the VHF. I rushed to the radio and tried to contact channel 9 (port). Without success. Suddenly my phone went off. Claire of the Mokara called; if we knew, we would be called on channel 16 (emergency and call channel). I thanked and quickly switched back to channel 16. Again, without success. Then a motorboat from the harbor approached us and indicated that we should follow. We did that and as we came around the corner into the docks, we realized that the huge cruise ship “Britannia” was just about to leave the harbor! We almost crashed into the cruise ship!
The passengers of the “Britannia” looked curiously at our tiny catamaran while we curiously looked up to the huge ship …
Now finally the radio contact to the harbor worked and we drove in the indicated direction. At the mooring berth it was very tight, but Tom managed to navigate us safely into the gap. When mooring we pulled a mooring line from the ground. (For non-sailors: Mooring leashes are thick ropes that are anchored in docks and that you tie up at the front of the boat, while mooring backwards to the jetty.)

After we had moved one berth and moored, we drove our e-scooters to the harbor office. We checked in, paid and checked out directly as we had to go straight to the yard the next morning.
Then we drove into the city. Cartagena is beautiful and it was good to walk around a bit. We ate at the restaurant where Tom had already eaten with a broker in January after seeing a Prout Escale (catamaran) here in Cartagena. Incidentally, the boat was still for sale here.

Back on KIRLANA we saw the Mokara arrive. Three berths further they moored and we met once again for beer and wine.
It was much too late to go to bed. Tom and I were not sleeping well. We were excited about the travel lift and the repair of the rudder bearings.

How it worked out in Cartagena and the following sailing trips, you will find in the next articles…