After 25 hours we made it on August 10th from mainland Spain to Ibiza. The sea was very restless so we could hardly rest on the day we arrived. But our journey around Ibiza and Formentera could begin.

On August 11th, after the hard work of the last two days, we slept in first. Tom and I were ready at about 12 o’clock. Again we weighed the anchor and sailed about 7 SM to Cala d’Hort. Everyone else was still asleep. Most of the time we needed the engine but we could support a little bit with sails. For the short distance we needed 2.5 hours.

We went there especially for Solana, because on noforeignland.com I had contact to Claudia of the LodeStar. Claudia, Andrew and their two girls (6,5 and 7,5 years) are from South Africa. They have been living on their Lagoon 400 since January, selling their homes in South Africa. They are on their way to the Caribbean.

When our anchor finally sat, the crew of the LodeStar came on board. We got to know each other and exchanged information.
The children got along immediately and played on the stand-up board of the LodeStar.
When jumping over the rail, Kiran injured his leg, so he could not join the adventure on the stand-up board behind the dinghy. Andrew drove out with the girls on the board behind. Good thing that we now have a non-automatic lifejacket for every child. Kiran was very unhappy though…

The evening we spent with Sarah and Ben (our first guests) on the trampoline on a starry night. We listened to music, talked and were funny. Sarah finally got well after suffering from seasickness.

After a relaxing night, I brought Tom to the beach restaurant on August 12th. He meant to work there, but as it turned out, there was no Wi-Fi. A problem, what should continue throughout our journey …

Sarah and Ben went on a shore excursion later that day, where they were caught by a heavy downpour. It was our first rain since we moved aboard. The people of Ibiza were thrilled.

In the meantime, the LodeStar girls came aboard and spent a relaxing time colouring with Solana. There were too many jellyfish in the water to swim.
Andrew took Kiran, whose leg was significantly better, on the stand-up board and pulled him in the rain behind the dinghy. Thanks, Andrew! Kiran had a lot of fun.

Finally, it was time to get Sarah and Ben ashore. They wanted to take a taxi to the airport. We managed to bring the suitcase with the dinghy to the shore and asked the restaurant to order a taxi. Contrary to the afternoon statement, it was now said that it was uncertain if and when a taxi would arrive. We waited…
After a while, we decided to say goodbye and make our planned walk up the cliffs.

Above we had a fantastic view over the bay of Cala d’Hort, on our boat and the mystical island, which is rumored to be the tip of the sunken Atlantis.

A taxi drove by. We waited to wave to Sarah and Ben, but when the cab came by again, other people were inside!
Slowly the time until the takeoff became very tight.
We hurried back and indeed Sarah and Ben were still standing there. They had called the taxi office themselves by now.
So it was time to wait again …
Time passed but no taxi arrived and more and more groups of people seemed to be waiting for a taxi.

Finally Tom decided to talk to people in passing cars. The beach was virtually a dead end, so many cars drove out. Most refused to take Sarah and Ben with them, but eventually three young Argentines took them to the airport for 40 euros.
In fact, Sarah and Ben still managed on time and arrived well at home. 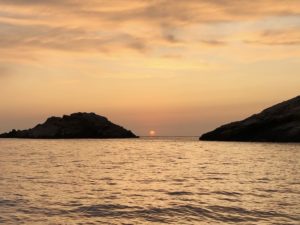 We spent a wonderful evening on the LodeStar and were very sad that this was also our last evening together. We hope to see the crew again sometime!

Now it was time to plan and travel alone. After some deliberation, we also left Cala d’Hort on August 13th. We wanted to sail to Ibiza Town or Talamanca Bay, where the Mokara had been staying for a few days. The plan was that I would drive while Tom works.
Well, we found out that my wind skills were still insufficient. I had checked the wind in the evening before, but not in the morning …
In the bay it was calm, so we went out and put up all sails. Around the corner, the wind almost knocked us over. Through the hills of Ibiza, gusts of 20-25 knots kept breaking in on us. The sails buzzed and I was completely overwhelmed! I didn’t know what to do…
Even Tom was surprised, especially since he was not prepared for sailing that morning, but was set to work on the PC and phone. Together we managed to recover the sails. Then we realized that no internet was available. A no-go for Tom’s work!
The children were awake now and came to me in the cockpit. I headed for the nearest bay to catch some Internet. While Tom made phone calls in the salon, I chugged as slowly as possible into the bay. I wanted to gain time for Tom. That succeeded quite well. After only 6 SM we arrived in the bay Sa Caixota.

The bay looked good. Many larger and smaller boats were anchored in the bay. After some searching we found a nice spot. Here it was quieter than the rest of the bay and we were able to snorkel to the beach. The water was nice and warm. Only the wind was a bit cold.
While Tom kept working, the kids and I were in the water and did some homeschooling. Actually, there were still holidays, but since we will not do school every day, I wanted to start early …

We stayed two nights in the bay and enjoyed the sun, the sea and Tom also enjoyed the good internet connection.
An awesome experience was some kind of jet ski show. Kiran, Solana and I drove the dinghy through the bay to look around. At the other end, we spotted a small collection of boats and jet skis. They seemed to be watching something. And indeed, a driver made tricks on his jet ski. He headed for the rocks, then did one or two backflips. Very impressive! And Kiran has a new career aspiration. 😉

But we finally wanted to meet the Mokara again and go to Ibiza Town. So we set off on the afternoon of August 14th. It was just bad that we now learned that the Mokara had passed our bay in the morning.
Well, we decided to go to Ibiza anyways, because we wanted to go to Decathlon and to explore the city. We finally needed a stand-up board and some other things.

The ride was relaxed at first. We looked at where we would have to go between Ibiza and Formentera. It all looked a little tight but still easy to make. Then we entered the strait between the islands. As soon as we were there, we hardly knew what happened to us. Suddenly, crazy fast boats came from all sides. The ferries raced through the strait and many superyachts did the same. Our KIRLANA was shaken by the many waves and as the wind was still spinning, we tried to recover our sails between all those fast boats. Unbelievable, this passage! I had only one thought: I’ll never go through here again!

Shaken we arrived after 16 SM in the Talamanca bay. The ground was full of seaweed and it took us awhile to find a sandpit just off the other boats. Kindly enough, the Englishman behind us let some extra chain out, so that the distance was slightly larger. The bay was not nice. It rocked constantly and we had to be careful all the time that no one was trying to anchor on our tiny sandpit. That would inevitably have led to collisions.

In the dusk, we drove the dinghy to a small berth. We strolled past the marina with its many super yachts and expensive restaurants, towards the city center. But we were too exhausted and took a taxi back to eat in a stand restaurant.
Finally we went back to the boat, pretty tired. 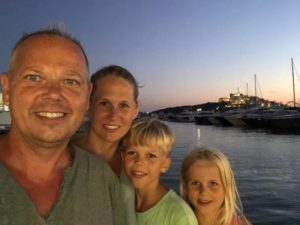 A kick in the teeth…

On the 15th of August there was a Christian holiday. Tom and Solana managed the excursion to Decathlon. Crabwise they had arrived there with the e-scooter. Back they had to take a taxi, because the stand-up board would not have fit on it. However, when Kiran and I wanted to bring the unsuitable rudder bearings to the post office in the afternoon, we found that many shops were closed because of the holiday.

Without having achieved anything we drove back to Talamanca Bay.
Back on board, we noticed that the fridge was not running anymore. We tried to find out what exactly was going on, but without success.
Finally, we decided to go explore Ibiza with the scooters. The city had a great atmosphere. In the old town street artists performed their tricks.

After a few tapas we went back on board. We tried again to find out what was going on with the refrigerator. Tom measured the incoming current and taught Kiran about the meter and the basics.

Again we did not get any further. Power arrived at the end of the cables… We decided Tom would go to the yacht supplier the next morning and ask for help.

The nice gentleman at the yacht supplier could not help us unfortunately. We researched further, trying to find out which refrigerator we had and which compressor and how everything was related …
But finally we were pretty desperate and frustrated. The rocking in the bay tugged at our nerves and we could no longer think straight. We also did not know where to go. The weekend was approaching and we would not achieve anything in Ibiza until at least Monday. We spontaneously decided to leave the bay in the afternoon of the 16th of August and go back through the strait between Ibiza and Formentera. Actually, our rough target was again Cala d’Hort or a similar bay. But during the drive, we looked in our new “Portbook” and saw the beautiful bays of Formentera. A look at the wind apps told us that we would have to go to the west side of the island. So we really had to go through the busy strait. However, we did not care, the main thing was out of Talamanca and the rocking!

How it went, you can read in the next article …