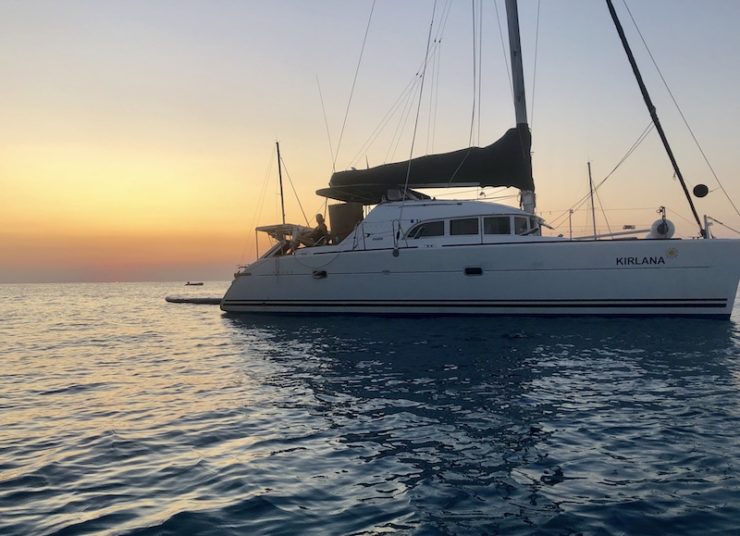 Ibiza was a mixed experience for us. Nice moments, but we were hit by a lot of deep blows in Talamanca Bay near Ibiza Town. The swing in the bay made us particularly tired, so on August 16 we spontaneously decided to simply drive off.
When we drove out of the Ibiza Town area we turned towards Formentera instead of Cala d’Hort which we had originally thought of.

About 3 hours and 10 SM later we reached the Platja de les Illetes on Formentera. White sand and turquoise water greeted us. We anchored with relief.

After we had a little rest, we took the dinghy to the beach. We missed the sunset because the waves on the shore were stronger than expected. Nevertheless, we took a nice walk on the beach.

Leaving in the dark we managed to get off the beach and get back on board KIRLANA. 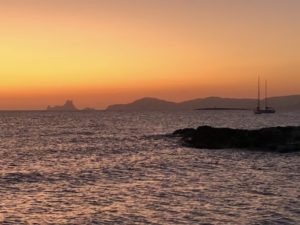 In the morning of August 17th Tom and I made the decision to go to Cala Saona (6 SM). According to our new portbook, the most beautiful beach on Formentera should be here.
What can I say? We weren’t disappointed! Crystal clear water over sand, turquoise – a dream!

If only it weren’t for the fridge … and missing internet!

Internet was not a big problem in the mornings and evenings, but the rest of the day the network was paralyzed by the many boats that came into the bay.
At first we didn’t notice that because it was the weekend. But later it should become a problem.

After our arrival we got ashore with the e-scooters. Incidentally, this is an adventure every time you have to drive the dinghy to the beach. And we never actually came ashore dry… We drove towards Sant Francesc with our e-scooters, the next town on the map. With blazing sunshine and partly on tracks across the fields with huge stones (here we had to carry the scooters), we finally reached the place in the middle of Formentera.

Actually, our goal was a hippie market, which was listed in our portbook, but it turned out to be a tiny second hand market with just three stands. Slightly disappointed and above all exhausted from the heat, we dragged ourselves into a restaurant with air conditioning. We usually prefer to sit outside (in the shade), but this time everyone had to cool off. A little more relaxed, Solana and I went shopping in the surrounding shops. Solana was desperately looking for a shirt with a leopard print, but that has been extremely difficult.

We took another route back to the bay which was a little more pleasant.

What do we do with the fridge???

Analysis of the refrigerator continued on board. Lagoon itself was of no help at all. Neither the dealer in Germany, nor the Club Lagoon. We also made little progress online. Partly because of the internet problem and partly because we didn’t know what was broken and what we needed new.
Gradually it became clear that the compressor had to be broken. And with that came the question of whether we should buy a new compressor for 600 euros or a new refrigerator for 1,200 euros. You have to know that the original refrigerator is incredibly deep and you have to crawl inside up to your shoulder to get to the back wall. So very impractical… 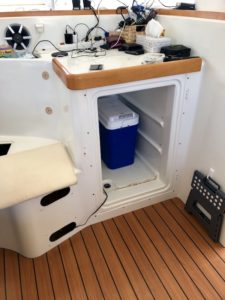 Since we couldn’t really figure out what kind of compressor we would need (we couldn’t find the compressor we had on the Internet and the dealers in Formentera and Ibiza couldn’t find it either), we finally decided to buy a new refrigerator.
Fortunately, we found help on Facebook. (I was never a fan of the site, but since we started dealing with boats, I have found an incredible amount of information and help!) Someone had replaced the refrigerator in their Lagoon 380 from 2001 (same year of construction), about a year ago and documented the process. He also sent us the exact type of refrigerator so we could be sure it would fit.

The next question was where we could have the fridge delivered to. We didn’t have an address…
So back to Ibiza and there to the yacht supplier? Well, he wouldn’t be happy if he was only used as a delivery address. We couldn’t afford the port, nor the yard. And the companies wouldn’t get out into Talamanca Bay.
So what to do? By indirect means we found a contact in Ibiza that would help, by other indirect means we found someone else on Formentera. Tom visited him and agreed that we would have the refrigerator delivered to him and that he would bring it to us with his boat and help with the installation.

In the meantime, by the way, I regularly drove Tom to the beach, where he used a rental car to get to Sant Francesc to work in a café or restaurant with wifi. In the early evening we always used the car to explore Formentera.
One of the most beautiful islands by the way!

Finally, the fridge arrived at the company’s office on Friday August 24th. We started to remove the old fridge. Tom had bought an electric saw in the hardware store the day before. Unfortunately only the green series from Bosch (always buy the blue series if possible!).
We think, Lagoon might have built the fridge first and then added the boat around it… The work was caustic, but was going well. After about two hours, our cockpit was full of GRP pieces from the old refrigerator and our bodies itched from the fiberglass.

Tom spoke to that guy in the afternoon, which was why I had to get him ashore since we had no network on board again. At first he wanted to come in the evening or the next morning, but suddenly it was said that he could come on Monday at the earliest! Since we didn’t know if he would really come then and we didn’t want to wait another weekend without a fridge, Tom took a taxi to the guys company office in La Savina and picked up the huge package.
Back in Cala Saona we carried the package together down the big hill to the beach and under the prying eyes of beach visitors into the dinghy.
There was no room for the children now. So they stayed on the beach with Tom’s backpack (and the computers inside) while Tom and I brought the fridge on board. We managed to get the package on board without it falling into the sea. Yeah! 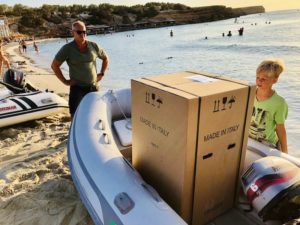 I went back to the beach, then I briefly went to the kiosk in the hotel with the children and finally brought all of us back on board. Tom had now unpacked the new refrigerator, brought it into the salon and put the GRP pieces in the empty box.
We were relieved to spend a relaxed evening on board. 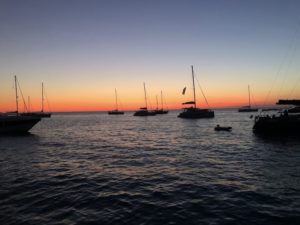 And the fridge adventure continues

The next morning we started installing the new fridge. To do this, however, we had to enlarge the original hole significantly. We took precise measurements and sawed off. Then the electric saw broke. We continued to work with small hand saws. In between the electric saw worked again, but only for a short time. Finally it was done. Now we just had to think about what the fridge should stand on and how it should be fixed in the back. Tom had bought insulation boards at the hardware store, which we were now cutting to size. Even a wooden board that had been lying around for weeks and parts of the old refrigerator or compressor were used to fix the new refrigerator. We were finally finished in the late afternoon. The new refrigerator was installed. Well, the new compressor still had to be connected to electricity and fixed on the floor. Although we were tired, we finished the work so that we could watch the fridge slowly cool down in the evening. We were concerned that not only the compressor was broken, but the power connections themselves and that the new refrigerator would break directly or would not work at all…

Since we worked all day and had hardly eaten anything, we decided to go to the restaurant in the 4 star hotel. We were very hungry and the first guests there. We enjoyed a fantastic meal with a view of the bay, the sunset and our boat.

You can read how it went in the next article …