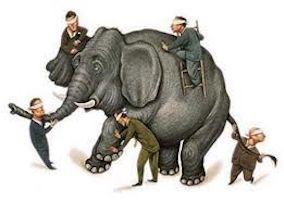 Throughout everything we observe and perceive, our individual and
current perspective plays an important role.

It’s comparable to the “rose-coloured glasses” of which lovers see the world.

Or, with the well-known fable of the Six Blind Men and the Elephant:

There were once six wise scholars. They were all blind.
The king sent the scholars of a journey to find out what an elephant is.

When they returned, they should tell the King about the elephant.

In India, they were eventually led to an elephant with some help from the locals.
Now, these six scholars were trying to get an idea of the elephant simply through touch.

The first sage had stood at the head of the beast, feeling the elephant’s trunk.
He said, “An elephant is like a long line.”

The second scholar had felt the ear of the elephant and said,
“No, an elephant is like a big fan.”

The third scholar spoke, “But no, an elephant is like a fat pillar.”
He had felt a leg of the elephant.

The fourth wise man said: “So I think an elephant is like a rope with a few hairs at the end”,
because he had only felt the tail of the elephant.

The fifth sage told his king, “So I say an elephant is like a forest.”
This scholar had felt the skin of the animal.

And the sixth sage stated, “An elephant is like a spear.”
He had felt the tusk of the elephant.

After these contradictory statements, the scholars feared the wrath of the king.
They could not agree on what an elephant really was.
But the king smiled wisely: “Every one of you is right. You have all told the truth. You touched
different parts of the animal, and so you gave different explanations. “

The scholars shook their heads in embarrassment after realizing that each of them had only
touched part of the elephant and that they had settled for it too quickly.

When you experience, observe, or judge something in your life, be aware that you perceive the situation
from your own perspective.
For EVERYONE ELSE, the same situation is experienced DIFFERENTLY.
No two individuals have the same perspective, but we can try to understand and accept the other’s perspective.

Recently, I discussed lying with my daughter. 😀
Something is only a life if something wrong is intentionally or deliberately claimed.
Again, this depends on the perspective of an individual.
If something wrong is claimed because the person believes it to be true, then it is not a life, as the person is
speaking from their own truth.

Depending on how the light falls,
an ordinary stone glitters like a diamond.